A speeding vehicle flew through the air and landed in side of a-story building after the driver lost control of the vehicle, igniting a small fire with two people inside in Southern California on Sunday morning.

According to Dailymail, one person was still trapped inside the vehicle as of 6.45 am Pacific, the Orange County Fire Authority (OCFA), said.

The other individual had already gotten out of the car, which was lodged into the side of an office building in Santa Ana.

Los Angeles County Urban Search and Rescue (USAR) was able to free the other individual in the vehicle, after the person was trapped for more than an hour inside the dangling car, Captain Stephen Horner of the Orange County Fire Authority told the Daily Mail.

Then the rescue team went to work, to get that other individual safely out of the vehicle. ‘USAR was able to access the passenger door,’ Horner said. 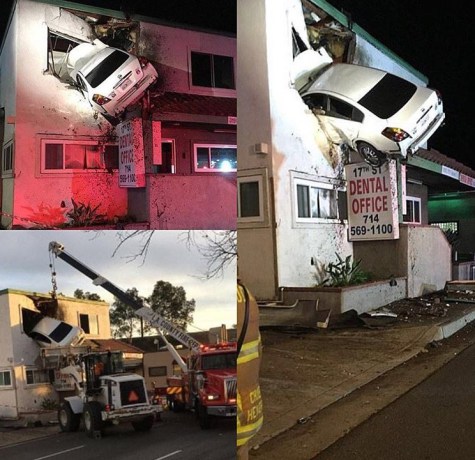 #Obamagate Trends: Trump hits back at ex-President Barack over ‘Russian interference’ in US polls probe

Nigerians React To One Billion Oil Barrels Found In North-East