— Fisherman miraculously survives after a hippo swallowed him half way | Photos

This shocking picture shows the moment a fisherman was almost killed by a hippo after it caught him off guard.

A shocking video shows the moment a fisherman was almost killed by a hippo after it caught him off guard. Photographer Frederico Genovese, 47, came across the horrifying incident last month while travelling to Lake Naivasha in Kenya, home to 2,000 hippos.

The 47-year-old was horrified to witness fisherman Mathew Wanjiuku be seized by the hippo and held captive and unable to escape for 10 minutes while the animal bit him. 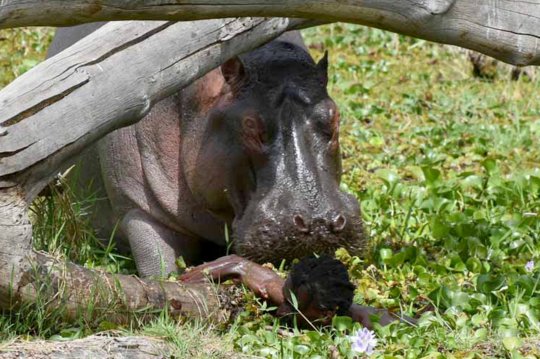 Onlookers attempted to scare the huge mammal by banging on a metal piece before it eventually it moved off, allowing Mathew to narrowly escape with his life, covered in blood and with shredded clothes.

After two weeks in hospital, the fisherman was discharged on Sunday and has since made a full recovery.

Frederico said: ‘I have never seen anything as shocking as this before. I heard the indistinguishable sound of an advancing hippo behind the one guide.

‘The hippo found a wide enough opening, allowing it to bite down. Stamping its feet and swinging its head vigorously, the hippo appeared to be trying to trample its victim. ‘There was a chorus of helpless screams coming from the water’s edge. 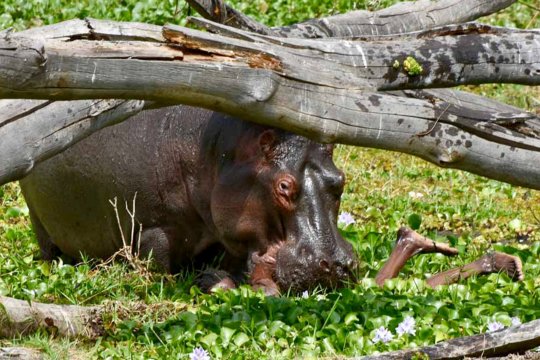 ‘Some helped to hold an iron sheet up so that others could bang on it with sticks to make noise, which after about 10 minutes seemed to work as the beast moved off.

‘Mathew appeared from under the tree and fuelled by the fear of being attacked again, decided to make a dash for the safety of the shore. ‘He was lying on the side of the lake, covered in blood, with most of his clothes torn and tattered, he looked to have escaped death after the beating he had just received.’ Frederico explained that four fishermen were caught off guard by the beast before Mathew, the slowest of the four, was seized by the hippo. 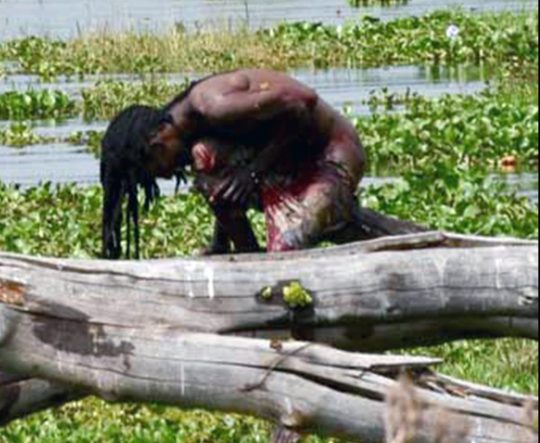 In the shocking footage, once seized, Mathew manages to get underneath a fallen tree in the hopes of avoiding the predator, which in turn managed to find a big enough gap to bite down on him.

The hippo can then be seen biting down on his arm, shoulder, and torso, leaving him on the floor losing blood and with no chance to escape. But with help from people around, the hippo eventually walked off leaving Matthew covered in blood on the shore.

School administrator Chad Wright, 31, shared Frederico’s footage after hearing of the horror. Frederico said: ‘There was a general sense among those around me that this fisherman was incredibly lucky to be alive. I wanted to share this story to shed some light on the dangers that a lot of African’s face living alongside these wild animals. 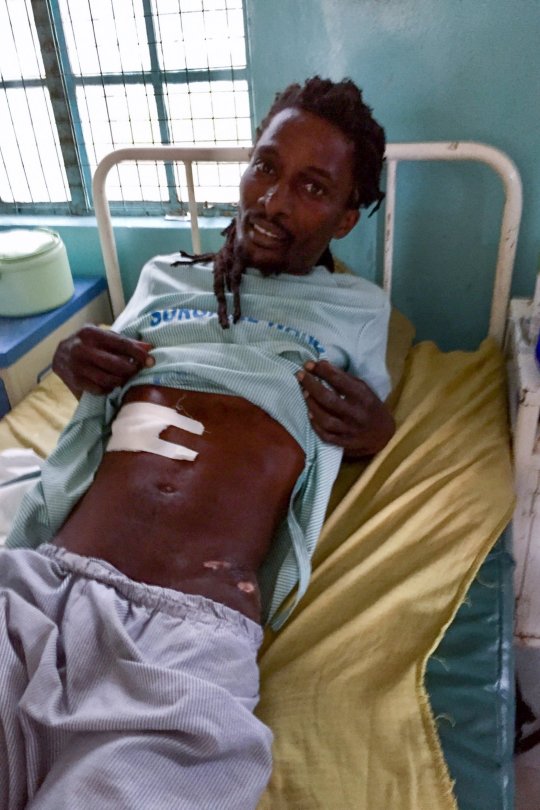 ‘I know hippos have children and are willing to die for that instead of stealing. He was grabbed by the head and rattled, the hippo penetrated his ribs, and his two arms were passed from side to side by the teeth of the hippo.

‘It’s difficult for the fishermen because they still go back to the lake to fish for necessity.’ Mathew was rushed to a nearby hospital for treatment, where he was treated for external injuries. In video footage of him being discharged from hospital on Sunday, he said: ‘I’m good, I’m lucky. Thank you for coming and seeing me, I’m still breathing. God is good because I’m alive, God bless you guys.’

Job sites and recruitment agencies in the US