A photo school children segregated in a classroom in South Africa has sparked serious discussion on the Internet.

Many slammed the teacher and school for such a pathetic decision to segregate white pupils from blacks in their sitting arrangement. 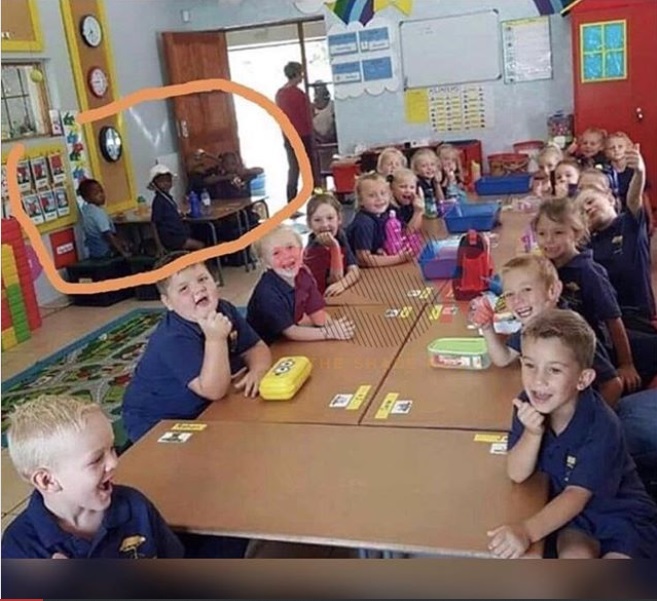 The teacher is at fault here, no other explanation, she knew what she was doing, one commenter wrote.

See some reaction below:

khutsomabule @its_thabie: reading these comments from Americans – so uneducated yet they want to comment on what’s happening 🙈. Can people educate themselves before commenting.
The teacher is at fault here, no other explanation, she knew what she was doing.

khosinyathi @belle_burnadette:  my mouth hung open as I read this, being a dark skinned South African who has a job and didn’t bleach her skin, you’re greatly misinformed 🤦🏾‍♀️

kelsiie_sunshine: Racist people are stupid beyond measure. Disgusting n all racist people lack a huge some of worth. They are pathetic losers who lack love for themselves before any1 else. The lowest of the lowest. Pathetic sies!!!! Gaaa

asipoflynn: Imagine racism in your own country against you .wow

ashleighanthony @arilennox: come to South Africa and check it out yourself , its not the way it’s being portrayed in this picture, I’ve never seen this kind of segregation in my life ,I stay in South Africa and schooled with all different races

remmy_rem: Maybe they wanted to sit over there with each other cuz they can relate

jaykixz @jazzyme_beautiful:  black South Africans are more racist than French or other Europeans. They hate and kill their fellow Africans