— Lamar Odom ‘Would Absolutely Get Back Together’ With Khloe Kardashian

While pregnant Khloé Kardashian‘s due date quickly approaches, speculation about Tristan Thompson‘s alleged infidelities has been rampant, according to PEOPLE that the Cleveland Cavaliers player is “a serial cheater.”

Coming to the rescue? Lamar Odom is worried about his ex-wife Khloé Kardashian after videos and photos of her boyfriend Tristan Thompson cheating surfaced on Tuesday, April 10.

But this is not the first time the Keeping Up with the Kardashians reality star, 33, has faced similar rumors. Before she was romantically linked to NBA boyfriend Thompson in September 2016, Kardashian dealt with allegations of extramarital affairs during her nearly eight-year relationship with ex-husband Lamar Odom.

“Lamar feels terrible for Khloe. He wasn’t sure if he should reach out and see how she’s doing. He feels for her.”

Khloe and Lamar’s Whirlwind Romance
Kardashian and Odom wed on Sept. 27, 2009 — one month to the day after they met (and nine days after getting engaged) — but the marriage fell apart after the former basketball player’s cheating scandal and drug relapse, which led Kardashian to file for divorce in 2013. 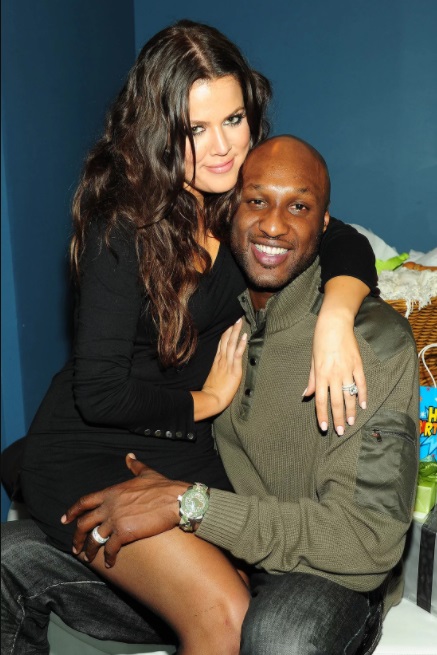 Cheating rumors against Odom first circulated in January 2012, when a tabloid report claimed Odom cheated on Kardashian with a woman he met at a Washington, D.C., strip club. And in July 2013, the pair were confronted rumors claiming Odom had been unfaithful to Kardashian after playing a game for the Dallas Mavericks.

“Love is blind … Lamar was so great at making me feel like I was the only one and I’m this princess. I never speculated cheating … so I didn’t know about cheating … until before the DUI [in 2013],” Kardashian told Howard Stern in January 2016.

“He was so good. So nothing was on his cell phones, [but] he had an assistant. They were all on his assistant’s phone, so he was really crafty,” she recalled as Stern asked the former Kocktails with Khloé host: “Doesn’t that feel awful when the assistant knows, and everyone knows?” To which Kardashian agreed, “Oh, it’s disgusting.”

“But all these rumors kept coming out in the weeklies, and as much as I know they’re bull—-, where there’s smoke there’s fire. Something has to be right here,” Kardashian revealed. “It is humiliating on any level, but I found out he was cheating on me the majority of our marriage, I just didn’t know.”

In October 2015, Odom was rushed to the hospital after being found unconscious in a Nevada brothel. Near death, he spent four days in a coma, and Kardashian rushed to his side and called off their divorce proceedings temporarily.