This latest scandal has earned Kendall and Kylie Jenner widespread criticism on social media, as accusations of cultural appropriation and insensitivity mounted throughout the day on Thursday until they pulled the T-shirts from their website.

Celebrity sisters Kendall and Kylie Jenner were called “disrespectful” and “disgusting” after they unveiled a new line of T-shirts featuring their faces superimposed over images of musical acts including Notorious BIG and Tupac Shakur.

Voletta Wallace, Notorious BIG’s mother, criticized the Jenners in an Instagram post while a lawyer for the rapper’s estate threatened legal action should the “vintage” shirts, which were on sale for $125 each, continued to be sold on their website. In the post Wallace also claimed that they had not been contacted with a request to use his image.

“I am not sure who told @kyliejenner and @kendalljenner that they had the right to do this,” Wallace’s post read. “The disrespect of these girls to not even reach out to me or anyone connected to the estate baffles me. I have no idea why they feel they can exploit the deaths of 2pac and my son Christopher to sell a T-shirt. This is disrespectful, disgusting, and exploitation at its worst!!!” 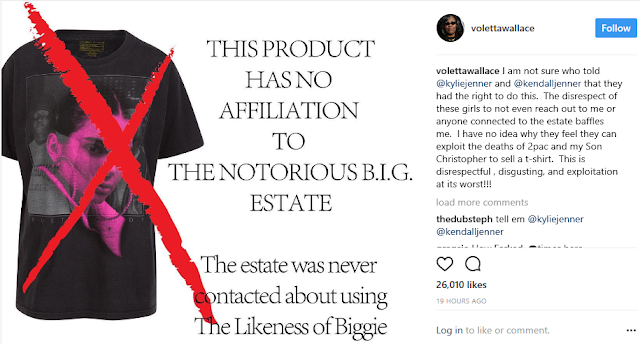 Sharon Osbourne also criticized the T-shirts, tweeting: “Girls, you haven’t earned the right to put your face with musical icons. Stick to what you know … lip gloss.”

The line also included images of the sisters plastered on classic-rock logos of bands such as Pink Floyd, Metallica, and The Doors.

Jenners were criticized for selling shirts on their website with their faces cropped over images of artists including Notorious BIG, Tupac and Ozzy Osbourne