China says it has successfully landed a spacecraft on the far side of the Moon, the first ever such attempt and landing.

#BREAKING: China’s Chang’e-4 probe successfully made the first-ever soft landing on the far side of the Moon on the South Pole-Aitken basin Thursday morning, a major milestone in space exploration. #ChangE4 pic.twitter.com/mt2YTWqlxs

It is carrying instruments to analyse the unexplored region’s geology, as well to conduct biological experiments.

The landing is being seen as a major milestone in space exploration.

The Moon rover as depicted in Chinese state media 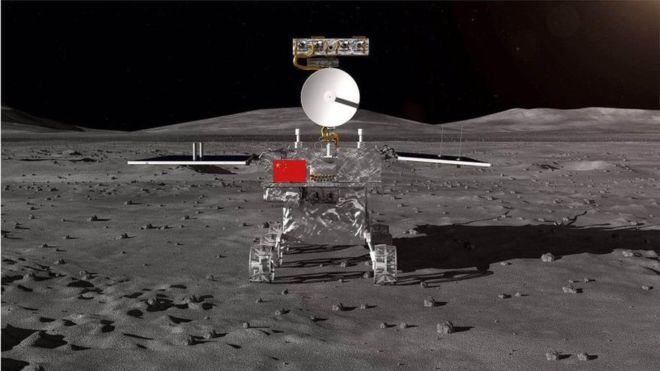 There have been numerous missions to the Moon in recent years, but the vast majority have been to orbit, fly by or impact. The last manned landing was Apollo 17 in 1972.

The Chang’e-4 probe has already sent back its first pictures from the surface, which were shared by state media.

With no direct communication link possible, all pictures and data have to be bounced off a separate satellite before being relayed to Earth.

Why is this Moon landing so significant?

Previous Moon missions have landed on the Earth-facing side, but this is the first time any craft has landed on the unexplored and rugged far side.

Ye Quanzhi, an astronomer at Caltech, told the BBC this was the first time China had “attempted something that other space powers have not attempted before”.

The Chang’e-4 was launched from Xichang Satellite Launch Centre in China on 7 December; it arrived in lunar orbit on 12 December.