The world has come a very long way since its creation. The things that we are currently familiar with weren’t the same in the past and most certainly wouldn’t be remain the way they are in the nearest future. Judging by the dramatic change seen in just a few years ago from now, it does tell us that the future generation might wonder what we the present generation were thinking when they go through the images of what we consider as first class and normal at the moment. We bring you historical, shocking and unexpected photos dating back to some centuries ago and they certainly bring  up emotions of wonderment when we go through them. Glance below to see some rare old images that will change the way see the past.

Check out the “Punt Gun” used for duck hunting. It was capable of killing 50 birds in one fell swoop. In the late 1860’s it was banned.

Tandem adult tricycles used to be a popular trend in the 1880’s because they are more stable than tandem bicycles. The Columbia Tricycle Company claimed that they ensured “absolute freedom from danger of accident.”

This photo captured a girl in the early 1900s at a gravesite. It wasn’t until years later that the abnormality was noticed.

Annie Edison 63-year-old widow was an American adventurer who, on her 63rd birthday, October 24, 1901, became the first person to survive a trip over Niagara Falls in a barrel. 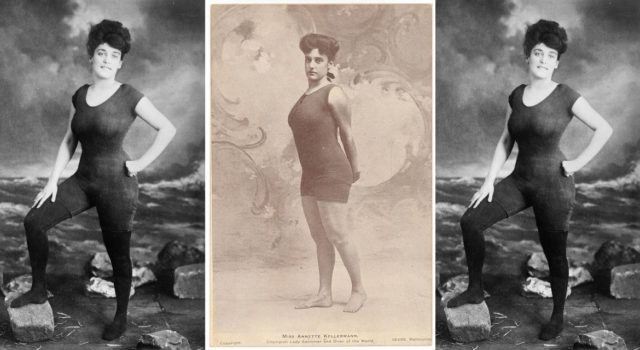 Annette Kellerman was an Australian professional swimmer, vaudeville star, film actress, writer, and business owner popular for promoting women’s right to wear a fitted one-piece bathing suit, 1907. This was when women were expected to wear cumbersome dress and pantaloon combinations when swimming. She was arrested for indecency on Revere Beach, Massachusetts for wearing a fitted one-piece bathing suit.

The Armenian Genocide also called the Armenian Holocaust or traditionally among Armenians, as the Great Crime was the Ottoman government’s systematic extermination of its minority Armenian subjects from their historic homeland in the territory constituting the present-day Republic of Turkey. It happened during and after World War I and was implemented in two phases: the wholesale killing of the able-bodied male population through massacre and forced labor, and the deportation of women, children, the elderly and infirm on death marches to the Syrian Desert.

Walter Yeo, a sailor wounded at the Battle of Jutland, is supposed as the first person to receive plastic surgery in 1917. Yeo’s surgery not only repaired his face, but gave him new functioning eyelids too.

Back in the 1920’s, beach patrols measured the length of women’s swimsuits to make sure that they aren’t too revealing.

This is no flood — it’s illegal alcohol being poured out a Detroit window during Prohibition (1920-1933). Detroit was the central place for smuggling liquor from Canada into the United States. When Michigan state police raided a Detroit restaurant suspected of serving liquor, they wound up arresting the Mayor, a Congressman and a local sheriff before flooding the illegal alcohol out of the window.

Here is a portable outdoor baby cage, designed in 1923 so that babies in the city could get fresh air and sun while their mothers did housework.

This Hippo was trained to pull a two-wheel cart in 1924.

The real Winnie the Pooh and Christopher Robin in 1927

Kalinin K-7 was a giant experimental aircraft invented and tested in the Soviet Union in the early 1930s. It was of uncommon configuration with twin booms and wide underwing pods housing fixed landing gears and machine gun turrets.

Shooting practice for German soldiers in 1935.

The last ever public execution in the United States, 1936

Rainey Bethea (1909 – August 14, 1936) was the last person to be executed publicly in the United States. He was a black man who confessed to raping and murdering a 70-year-old white woman named Lischia Edwards. After being convicted of her rape, he was publicly hanged in Owensboro, Kentucky.

One brave man refrains from lifting his arm in the Nazi salute in Hitler’s presence at a 1936 rally.

The inside of the Cathedral of Amiens during World War II.

This gas-proof was sold in England on the eve of WWII. During the First World War, German forces used poison gas on Allied troops, Britons were afraid that Hitler might release them on civilian populations. Britons were well prepared in case of a chemical attack.

Atabrine was the first synthetic form of quinine used to battle malaria. The US military used the anti-malaria greatly in the South Pacific during WWII. This sign is close to a military hospital in New Guinea, where two-thirds of the troops were severally down with the disease.

Queen Elizabeth during Her WWII Service

The less-seen side of World War II

A German soldier buries an unknown English soldier that was killed in aerial combat in the Egyptian desert.

Soviet soldiers stand surprised at a large pile of human ashes found at the Majdanek concentration camp in 1944.

The Naked Gunner Rescue at Rabaul, 1944

This man is a young crewman of a US Navy “Dumbo” PBY who was on a rescue mission. He had just jumped into the water of Rabaul Harbor to rescue a severely burned Marine pilot who was shot down while bombing the Japanese-held fortress of Rabaul. To boost his ability to swim, he stripped naked since clothes and boots would obstruct his ability to swim. While Japanese coastal defense guns were firing at the plane right in the water during take-off, this brave young man, after saving the pilot, manned his position as machine gunner without considering putting on his clothes. A hero photographed right after he’d completed his heroic act. Naked.

A Japanese boy standing at attention after having brought his dead younger brother to a cremation pyre, 1945

This boy is a Japanese boy standing erect, having played his role by bringing his dead brother to a cremation ground. The photo was taken by a  man sent by U.S. military to document the damage inflicted on the Japanese homeland caused by air raids of fire bombs and atomic bombs. The boy standing at attention has a clear military influence. A closer look at the boy shows him trying to keep a stiff upper lip, and trying so hard to maitain a bold heart…isn’t that heart-breaking?

One of the greatest surfers of all time, Surfer Buzzy Trent with a Hawaiian “gun” surfboard ready to surf 40 foot waves – 1955

The priest helping a dying soldier – 1962

Father Luis Padillo in cassock was walking about paying last rites to all dying soldiers during the fight for an insurrection promoted by Venezuelan Fuerzas Amadas de Liberación  Nacional. Despite the danger, the  priest insisted on giving a last sacrament to dying soldiers. The photographer, Hector Rondón Lovera who had to lie flat to avoid getting shot, later said that he was unsure how he managed to take this picture.

The Debris of the astronaut Vladimir Komarov – the man who fell from space, 1967

Saigon execution: Murder of a Vietcong by Saigon Police Chief – 1968

While covering the Vietnam War for the Associated Press Eddie Adams took his best-known photograph – the picture of police chief General Nguyễn Ngọc Loan executing a Vietcong prisoner, Nguyen Van Lém, on a Saigon street, on February 1, 1968, during the opening stages of the Tet Offensive.

The Racial Segregation in the US South

The four small children in this photo sit huddled on steps outside a home in Chicago, behind a sign that reads “4 Children For Sale Inquire Within.” Their mother who was pregnant at the time turns her head covering her face from the camera.

The three younger children in this heartbreaking picture were finally reunited in 2013. They all had stories of horrible abuse, both before and after they were sold. One claimed that their mother sold them because she needed bingo money, and because her new boyfriend didn’t like children.