Former President Barack Obama speaks at the memorial service of Sen. John McCain (R-Ariz.) at the National Cathedral in Washington, D.C., on Saturday.

— “There are some things worth risking everything for,” the former president said.

— US former president, Obama called on America to rise above ‘mean and petty’ politics

Former President Barack Obama encouraged Americans to follow in John McCain’s footsteps by rising above the “mean, petty politics” that have entered the political sphere. 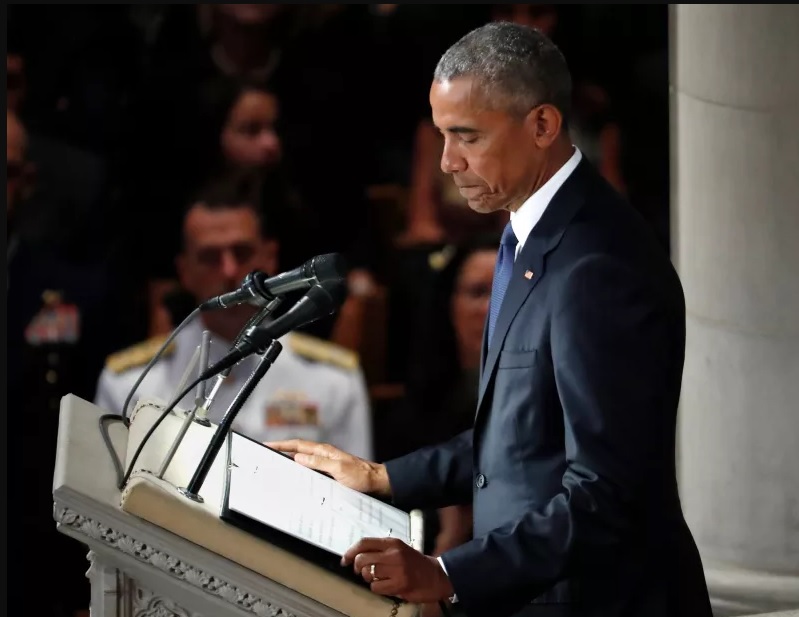 The Democrat eulogized the late Arizona senator, his Republican opponent in the 2008 presidential election, during McCain’s funeral on Saturday at the National Cathedral in Washington, D.C. Obama, reportedly listed in the program as McCain’s friend, called him a man of passion who had the best interests of the country at heart, even when he was wrong.

“To know John was to know that as quick as his passions might flare, he was just as quick to forgive and ask for forgiveness,” Obama said. “He knew more than most his own flaws, his blind spots. And he knew how to laugh at himself, and that self-awareness made him all the more compelling.”

Obama mentioned the recently resurfaced video from the 2008 campaign in which his then-rival defended him after a woman said she could not trust Obama because he is an “Arab.” 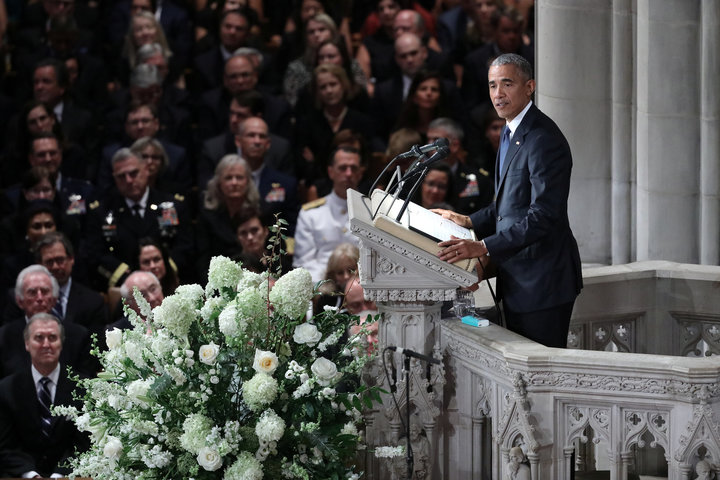 “No, ma’am,” McCain responded. “He’s a decent family man, a citizen that I just happen to have disagreements with on fundamental issues, and that’s what this campaign is all about.”

Obama said McCain’s actions in that moment didn’t surprise him.

“As Joe Lieberman said, it was John’s instinct,” Obama said, referring to McCain’s friend and former colleague in the Senate, who also delivered a eulogy. “I never saw John treat anyone different because of their race or religion or gender, and I’m certain that in those moments referred to during the campaign, he saw himself as defending America’s character, not just mine.”

Obama said that in a time of political upheaval, it’s important to rise above the easy route of anger.

“So much of our politics, our public life, our public discourse can seem small and mean and petty,” Obama said. “There’s a politics that pretends to be brave and tough, but in fact is born of fear. John called on us to be bigger than that. He called on us to be better than that. … What better way to honor John McCain’s life of service than, as best we can follow his example, to prove that the willingness to get in the arena and fight for this country is not reserved to the few, it is open to all of us. In fact, it is demanded of all of us as citizens of this great republic.”

“That’s perhaps how we honor him best, by recognizing there are some things bigger than party or ambition or money or fame or power,” Obama continued. “There are some things worth risking everything for. Principles that are eternal. Truths that are abiding. At his best, John showed us what that means. For that, we are deeply in his debt.”

President Obama sums it up perfectly here: “trafficking in bombast and insult and phony controversies and manufactured outrage…it’s a politics that pretends to be tough but in fact is born of fear. John called on us to be bigger than that, to be better than that. #McCainFuneral pic.twitter.com/bsHzyAtqKp

10 Plant-Based Foods To Boost Your Immunity