— Teddy A evicted from the #BBNaija House.

— This is the end of road for Teddy A in the Big Brother house but the beginning of a greater height in his career.

Teddy A has been evicted from the Big Brother Naija House on the 1st of April and it isn’t an Aprils’ Fool Joke. 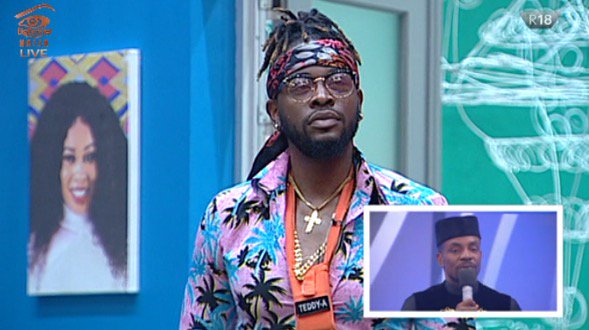 This is coming after BamBam was evicted from the game in a shocking Saturday Night Eviction that we all didn’t expect.

A video of the recently evicted housemates enjoying themselves in a hotel room has surfaced online.

The video was shared by a young man believed to be BamBam’s younger brother who was face timing his sister.

Teddy A n BamBam in the Hotel 👀 #bbnaija pic.twitter.com/hEtbo7R0Ym

Meanwhile, Big Brother Naija 2018 took a dramatic turn on Saturday when Bambam got evicted from the reality show.

Bambam was evicted after Biggie invited Ebuka and Steve representing Deloitte, a company in charge of Big Brother Naija votes, to the house.

Housemates, who were excited after the Saturday night cultural theme party, were depressed and confused after Bambam was shown the way out of the house.

As the usual norm, many of their fans were excited seeing them together while other share their concern.

One commenter: Is that toothbrush BamBam is holding issorait.I m worried for this girl though..yea you guys r super cute together but pls use ya head…you need to be sure u can handle being number 3 cos same people cheering u now will ask u if u didnt know Teddy was a bad boy be wise @BBNaija

Another wrote: now they can hv each other full time without being captured on webcam..