— In a heartbreaking clip filmed by the couple’s daughter, Dianne Phillips, the pair kiss one another goodbye.
— These couple are forced to kiss goodbye following 69 year marriage after getting sent to separate care homes

An elderly couple were forced to kiss one another goodbye following 69 years marriage this week after being sent to separate care homes.

Herbert and Audrey Goodine have been together for 73 years in total, spending the last three years together in a home.

However Herbert, who suffers from dementia, recently underwent a health assessment which found he should move to a new care home 45 minutes away.

In a heartbreaking clip filmed by the couple’s daughter, Dianne Phillips, the pair kiss one another goodbye.

Audrey can be heard telling Herbert that she will be ‘jealous’ of other women at his new facility, as they will get to spend time with him. 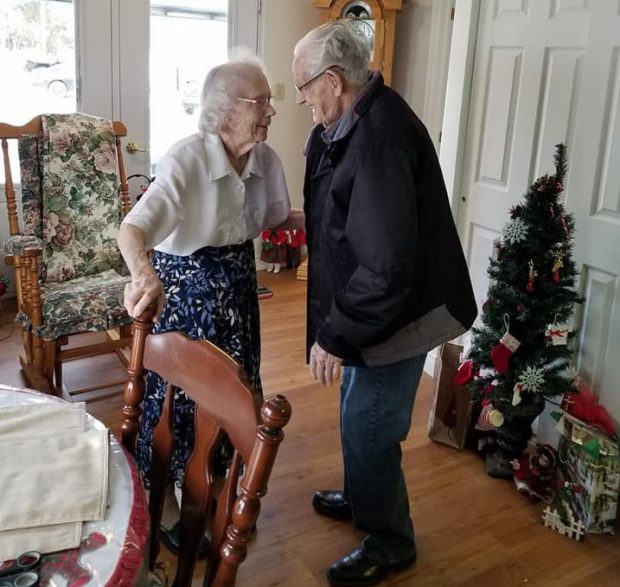 Ms Phillips said her mum then stood at the window in New Brunswick, Canada, and watched as a van took Herbert away on Monday – one week before Christmas.

Posting on Facebook, Ms Phillips – who says she understands why her dad has to be moved, but wishes the home had waited until after Christmas, said: ‘When talking to my parents yesterday I listened to my mother weep and I could hear my father in the background.

“Christmas is over for us now and this is the worst Christmas that we will ever have. Why could they not have waited till after the holidays.” I assured her that I tried everything to keep them together a few more days.

‘My parents have been together for a total of 73 years and still sleep in the same bed. I feel people need to know what a flawed system we have in place. Two words describe it “unethical and cruel”.’

Speaking to Globalnews.ca, Mr Goodine said: ‘You’d laugh if you knew how I met her. I still laugh about it myself. I was out of my house — of my flat — and I looked through the crack in the wall and I saw her. And I never forget it.’

A spokesperson for the Victoria Villa care home, where the couple were living, said she cannot comment on specific cases. 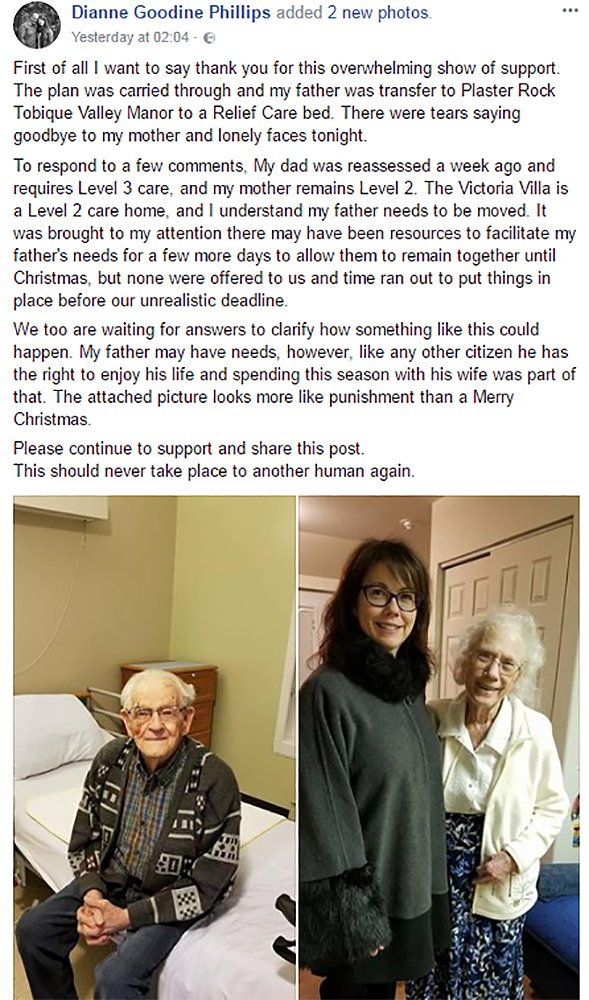 She stressed, however, that the home is only for residents who need ‘a little bit’ of supervision, whereas Mr Goodine’s new home can offer more.

Help! Save My Marriage, Even If My Wife Deprived Me of Sex For 1 Year — Husband Cries Out To Court

My Husband Is A Poor and Lazy Politician — Woman Tells Court